Whether you follow the blog or follow @fabeveryday on social media, you know that I travel a fair amount.  Living in Austin, AUS (aka ABIA, or Austin-Bergstrom International Airport) is becoming like a home away from home.  Certainly my home airport at least.  Here are some of my tips for travel at or through AUS.

ABIA is a small airport.  Don’t let the word “international” fool you into thinking otherwise.  Compared to my previous home airport LAX, AUS feels tiny.  This is not a bad thing.  It actually means you don’t have to get to the airport as early as you would at say, LAX (where you are sometimes pushing your luck to make your flight even when arriving two hours early).  Check-in and security lines at AUS are rarely long, and since the airport is not that large in general, it’s not a long walk to your gate.  Traffic is also not that bad within the airport.  I have never had a problem catching my flight by arriving one and a half hours in advance.

There are several yummy spots to grab a bite to eat at AUS, including local favorites like The Salt Lick, Amy’s Ice Cream, Hoover’s Cooking, ThunderCloud Subs, and Earl Campbell’s Sports Bar.  Many of these even include live music!  However, there are a few that are my favorites: 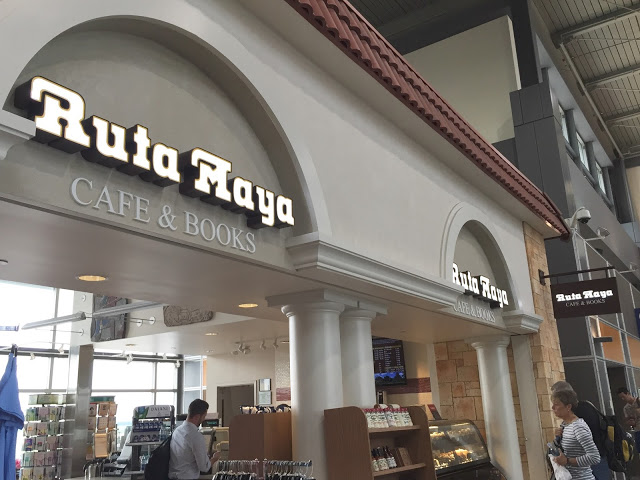 I don’t do much shopping at AUS, but if you needed to pick up some souvenirs there is a Austin City Limits/Waterloo Records store at the airport.  Here, you can get an iconic “Keep Austin Weird” shirt, a shirt that pays homage to Austin’s favorite brother, Willie Nelson, or some burnt orange Longhorn gear.