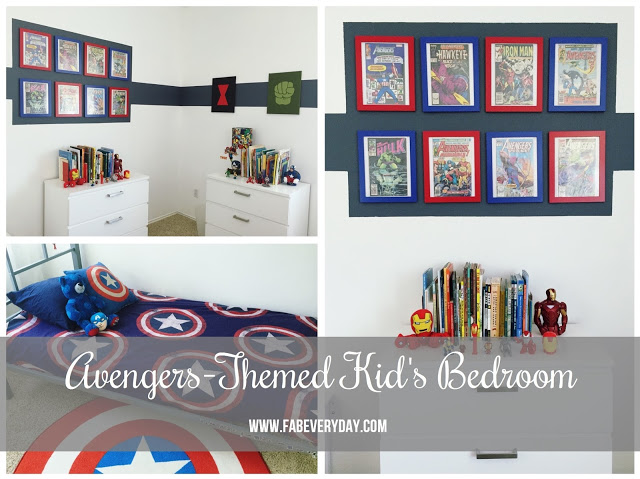 We are a Marvel family.  I loved X-Men growing up, and the hubs was a huge Spider-Man fan as a kid.  So it was only natural that our boys would also fall in love with the same universe.
The first heroes the boys latched onto were Avengers.  We even did a family Halloween costume as the Avengers a few years ago: 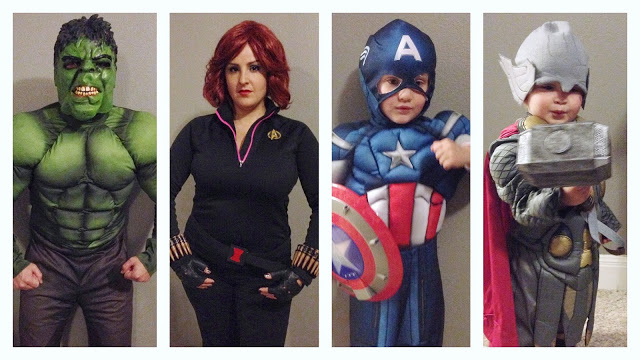 Fun fact: we used this as our holiday card cover the same year – wishing our loved ones a “super” holiday.
Over time, G became quite a big Iron Man fan, and S became an equally big Captain America fan (and yes, we saw Civil War on opening weekend, and yes, the boys loved it).  Their favorite colors are red (like Iron Man) and blue (like Captain America), respectively.  G even wants to be a genius/billionaire/playboy/philanthropist (like Tony Stark) when he grows up.  And why not?  Elon Musk does it.
It recently came time for us to do a “big boy room” upgrade for G (though we did upgrade him from the crib and nursery furniture, G’s room décor was still this Texas Longhorn décor scheme from when he was a baby).  Since S would sneak into G’s room almost nightly, we asked them if they wanted to get a bunk bed and share a bedroom for a while.  They agreed without hesitation.  To make it “their” room instead of just G’s room, we allowed them to choose the décor theme themselves, together.  Much to their father’s sadness, they decided to move away from the UT theme.  With G being an Iron Man fan and S being a Captain America fan, they decided to meet in the middle and have an Avengers-themed room.
Like the personal DIY touch G’s room had before, I wanted the room to be unique and not just full of the usual store-bought stuff.  I engaged the boys in my Pinterest search and idea generation (see the inspiration in my Children’s Bedroom Décor board on Pinterest) so it would feel like their own.  I also wanted to work with some of the existing room paint and the IKEA MALM dressers we already had.  And of course, I wanted to do it all on a budget.

Disclosure: This post contains some affiliate links, which means that if you click on one of the product links and make a purchase, I may receive a commission.  This does not cost you anything additional, and helps me to keep the rest of my content free, so thank you!

Here’s one comparison of the room before the “big kid” makeover: 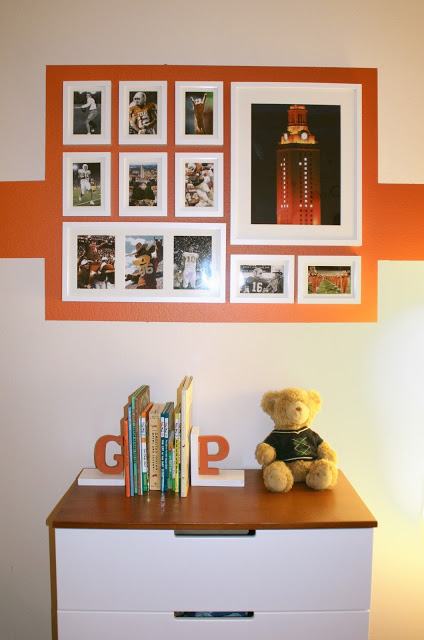 You can see details of G’s burnt orange, gray, and white nursery décor here.
And here’s what it looks like now, along with the details: 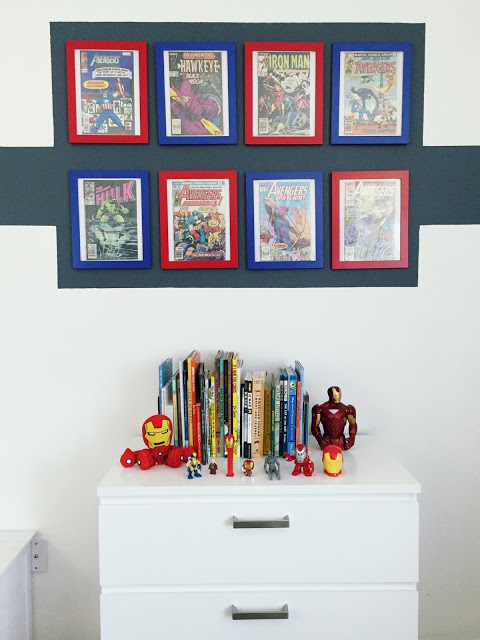 For G’s dresser, we used these simple red bookends and an Iron Man bust piggy bank. 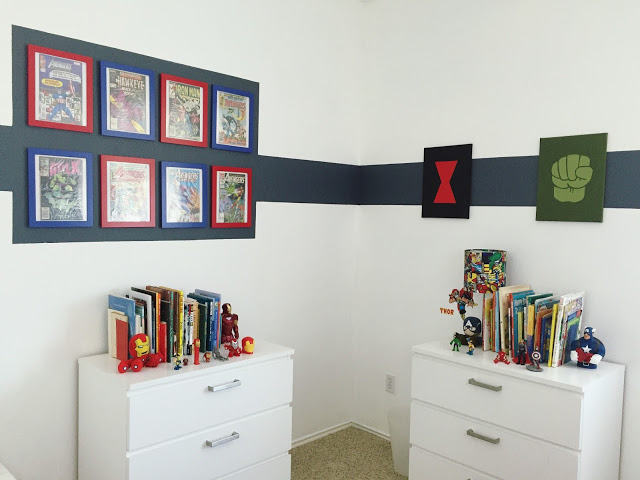 We re-painted the orange color block and stripe a dark gray color for an urban look.  We also added some new hardware to our IKEA MALM dressers to give them a makeover. 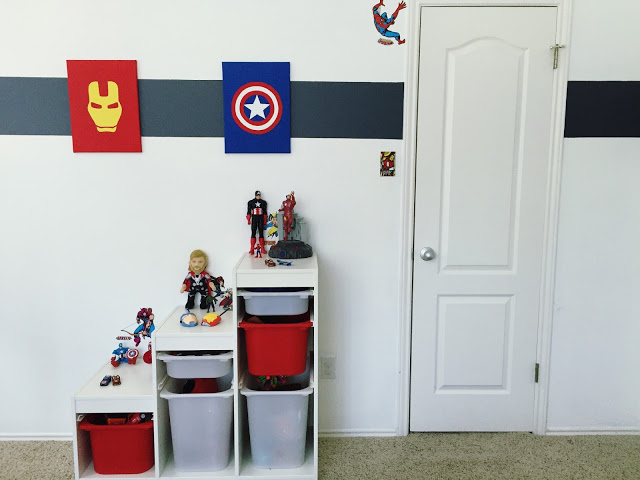 We kept our existing IKEA TROFAST storage unit, as the white color and red boxes still worked out well.  Per some inspiration on Pinterest, I painted some symbols for each Avengers character on canvas (more on that below). 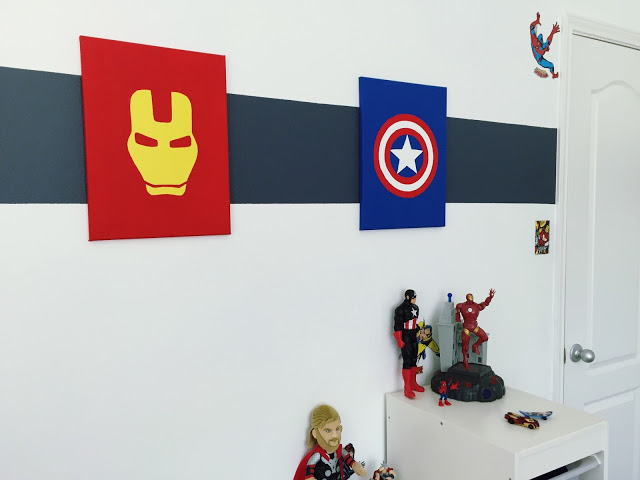 The boys’ many Avengers toys add to the room’s theme.  We also found some removable Marvel character wall decals on Amazon that we let the boys place around the room. 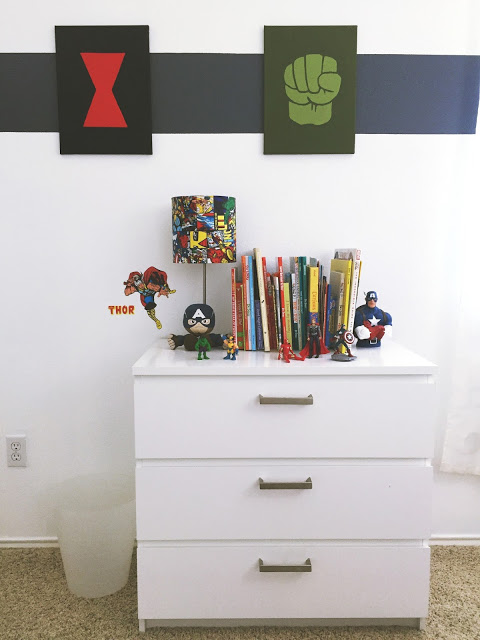 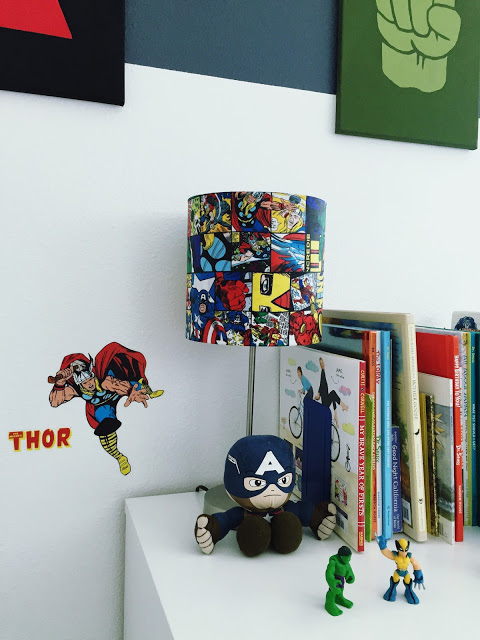 I added some Avengers fabric to an old lampshade with Mod Podge to add to the room’s overall look (more on this below). 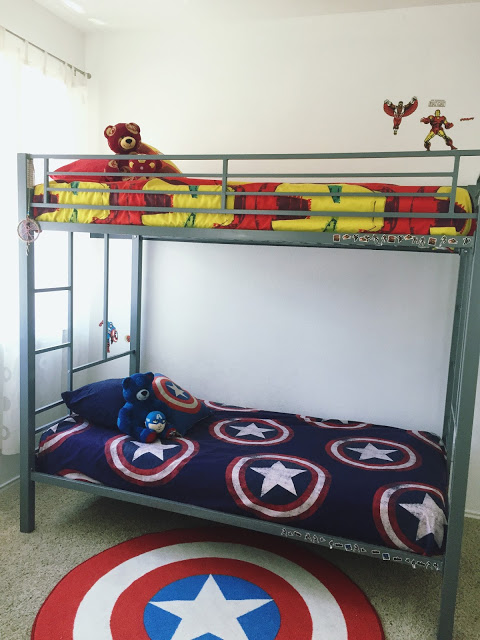 I loved the urban look of this simple, metal-framed, gray bunk bed from Walmart (the boys “customized” the frame one day with some Avengers stickers).  I couldn’t find duvet covers I liked at a reasonable price, so ended up ordering some custom art duvet covers from Redbubble for each of their characters.  The sheet sets are plain red and blue sets from IKEA. 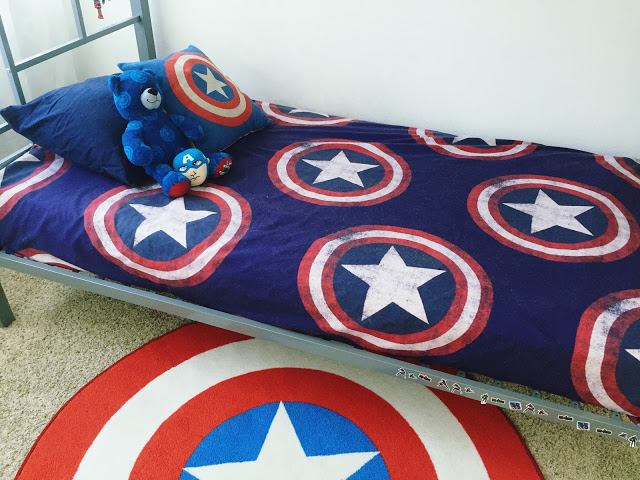 I found this round Captain America shield rug at ThinkGeek.  I just had to have it for the room! 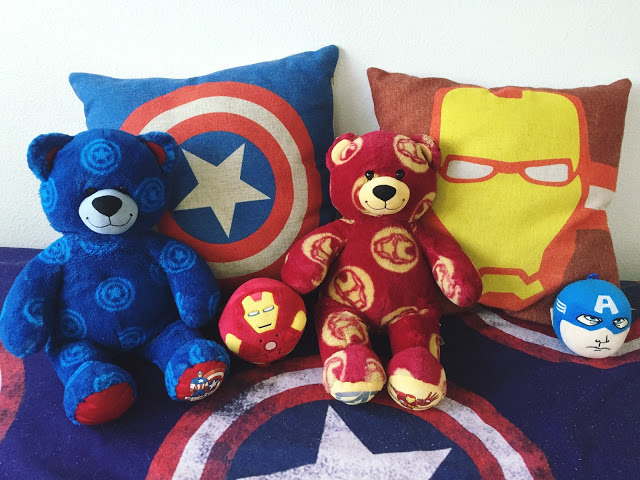 The boys already had their favorite Avengers character teddy bears from Build-A-Bear.  The throw pillow covers were purchased from Amazon (Captain America) and eBay (Iron Man). 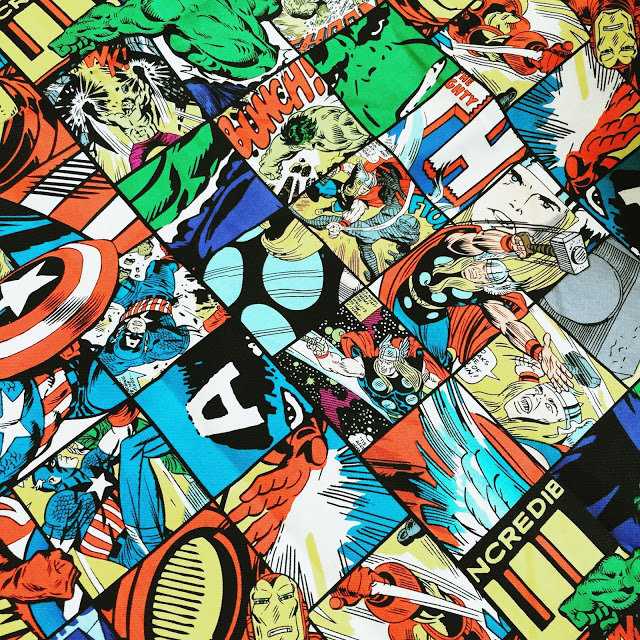 I wanted to customize a few parts of the room, and I was able to do so with some Avengers fabric from Etsy for some Mod Podge decoupage projects. 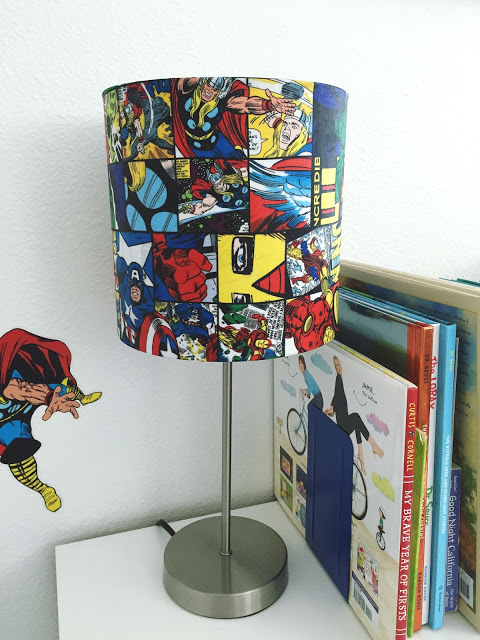 Inspired by this post on A Girl and a Glue Gun, I was able to decoupage an old lampshade with the fabric. 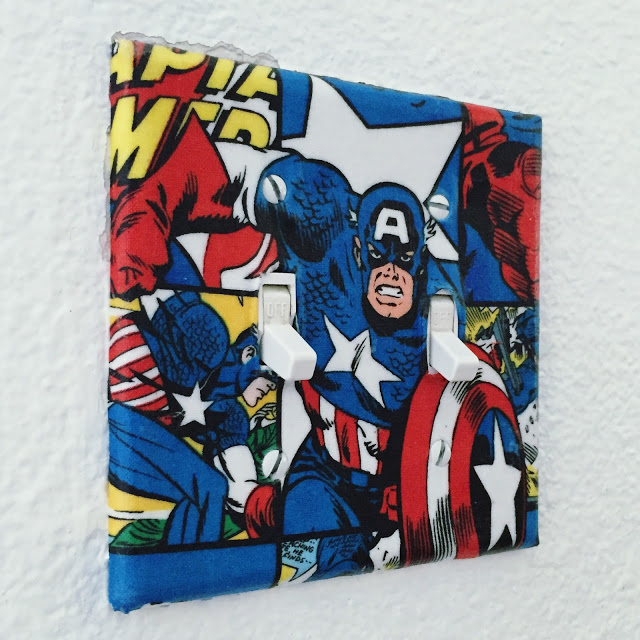 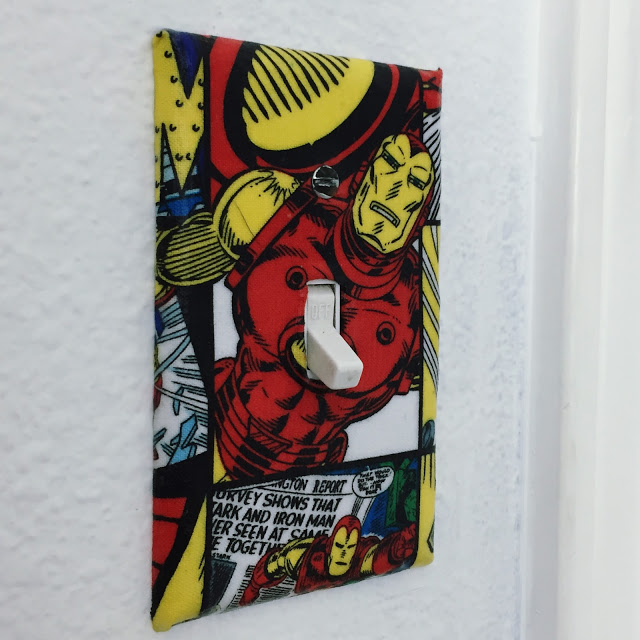 I also used the fabric to decoupage the light switch covers.  You can also find covers like this on Etsy if you’d rather buy them ready-made instead of DIYing them. 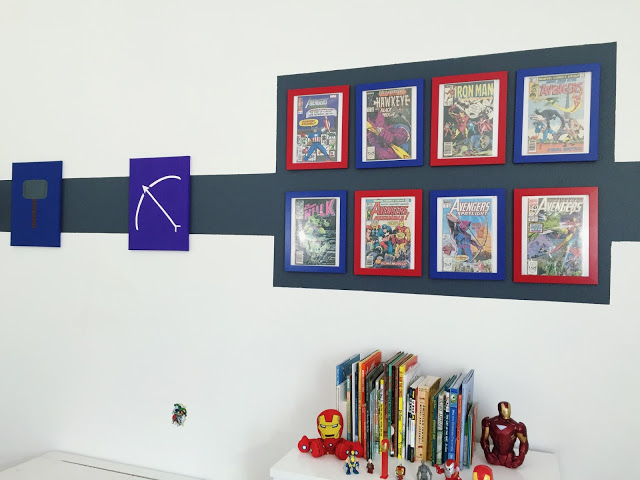 Keeping with the frames-in-the-paint-block theme from the old room décor, I decided to frame some classic Avengers and Avengers character comic books.  I collected some reasonably-priced vintage comics on eBay with covers that the boys and I liked. 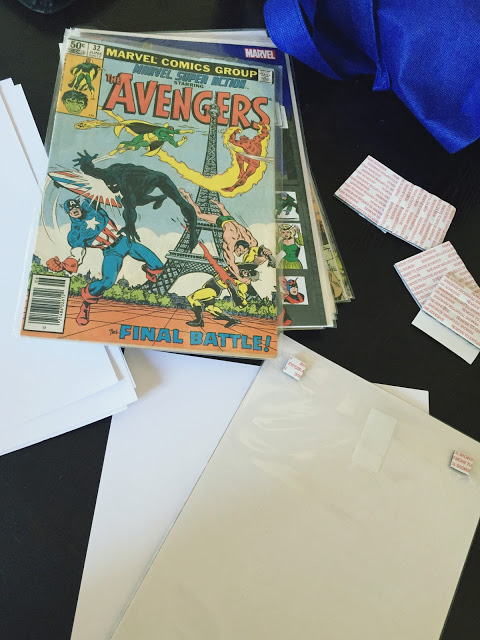 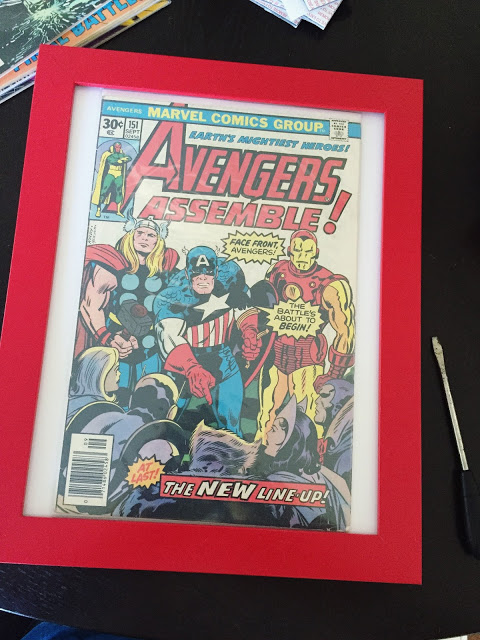 So as not to damage the comics too much, I kept them in their plastic and mounted them to white cardstock with double-side adhesive.  I them framed them into 8.5″x11″ IKEA frames (similar to these FISKBO frames). 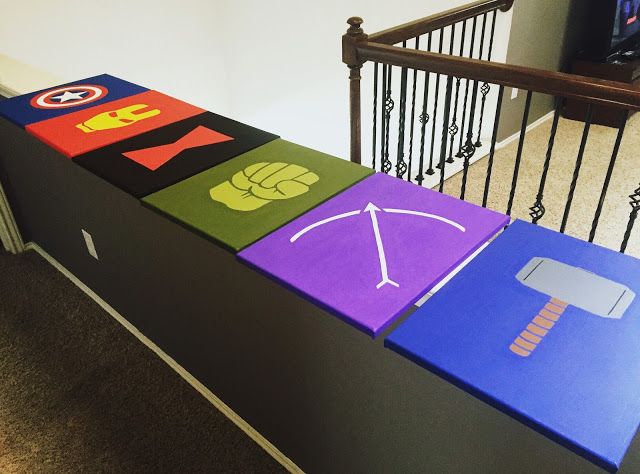 You can buy printed/framed art or painted art of the Avengers characters online.  But I personally love a painting project, so I decided to DIY them myself with acrylic paint on canvas.  I tried to keep all the symbols in the same size (height-wise) for some consistency.

This was a fun project, and we all enjoy the boys’ new room décor.  I wonder how long it’ll be before they are into a new phase, or want to be back in their own rooms.  Then I guess it will be back to the room decorating drawing board!