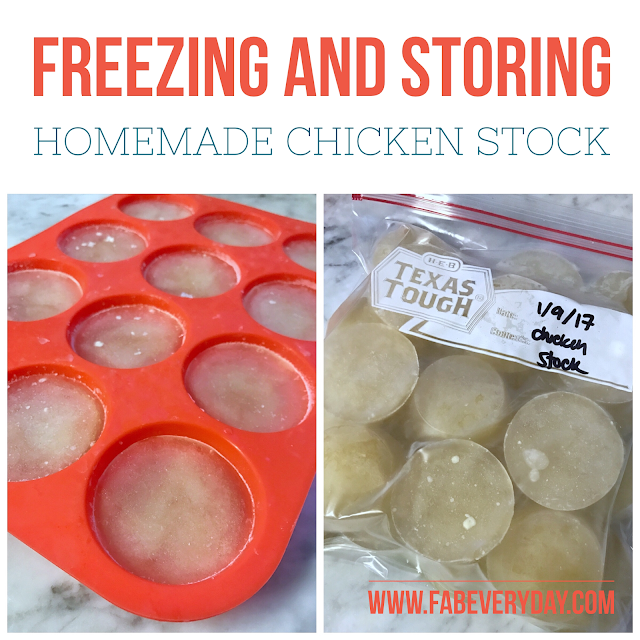 Disclosure: This post contains some affiliate links, which means that if you click on one of the product links and make a purchase, I may receive a commission.  This does not cost you anything additional, and helps me to keep the rest of my content free, so thank you!
I made a huge batch of chicken stock last weekend to stock up my supply (no pun intended), and was inspired to share some tips on how I freeze and store my homemade stock.
I love having fresh chicken stock available for cooking.  I feel like I go through a lot of chicken stock on an ongoing basis, so it’s convenient when I have a weekend day available to make a giant batch to freeze in portions to use later as needed.  FYI, homemade stock is very easy to make, and the simple ingredients also make the endeavor cost effective.
See the full instructions below, but you can also watch a quick video tutorial on Fab Everyday’s YouTube channel here:
First off, my go-to stock recipe is this Basic Chicken Stock recipe from Martha Stewart.  I originally got this recipe and method from my Martha Stewart’s Cooking School book years ago. 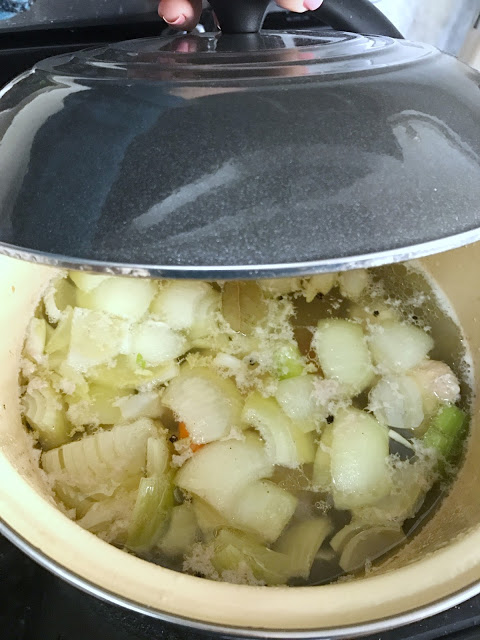 I make my stock in my enamel-on-steel stock pot by Le Creuset
I make the stock according to the recipe instructions.  Personally, I do a double batch, but note that makes a LOT of stock, which subsequently takes a while to freeze if you only have a few silicon trays in which to freeze them. 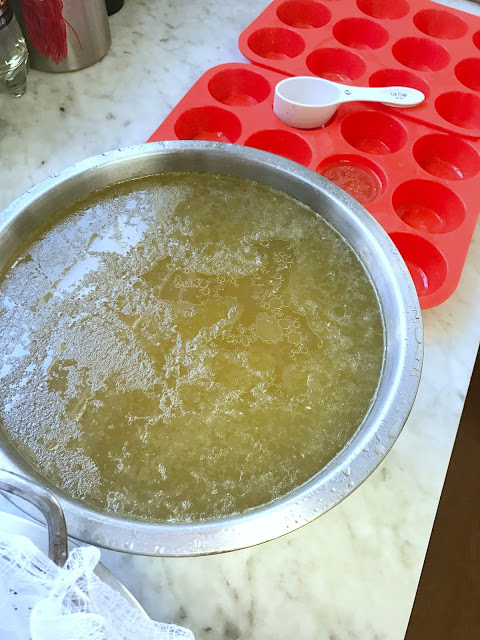 Before storing the stock, you need to skim as much of the fat as you can.  It is helpful if you skim fat while cooking so you don’t have as much after it’s done simmering.  If you do have fat left still (like the example in the photo above), you should cool the stock in the fridge before portioning for freezing.  When it cools, you can more easily skim/remove the fat from the top.

After the stock has cooled and the excess fat removed, it is time to portion for freezing.  I find that most recipes I prepare that require chicken stock (aside from soups) require portions of about a half a cup.  So I have found that freezing stock in 1/4 cup portions allows me some easy flexibility with quantities as needed, whether my recipe calls for increments of quarter cups, half cups, or even whole cups.

I use these silicon cupcake/baking pans from Amazon to freeze the stock.  Silicon works well because it is easy to remove the stock from them after freezing, and it is also easy to clean.  The baking cups hold about 1/3 cup of liquid, but I measure out 1/4 cup scoops into each for more convenient portioning.  Each silicon tray of 12 cups will provide for a total of three cups of frozen chicken stock, frozen into 1/4 cup increments.

I personally own two of the trays, which means I have to freeze them in batches.  While one batch is freezing, I keep the remainder of the chicken stock covered in the refrigerator. 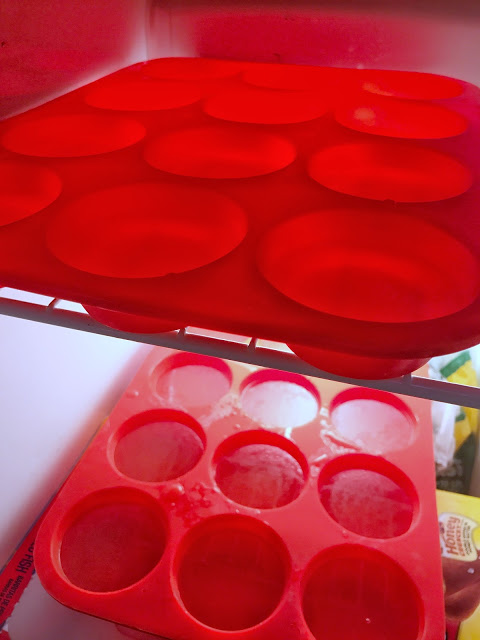 After pouring 1/4 cup of stock into each cup, transfer the silicon baking tray to the freezer.

Tip for transferring silicon trays full of liquid from the counter to the freezer: Since the silicon is flexible, it can easily spill if not moved carefully.  I find that a plastic cutting board (or anything rigid and flat) slipped under the silicon tray allows me to move the tray without spilling the liquid.  I then slide the tray off of the cutting board into the freezer. 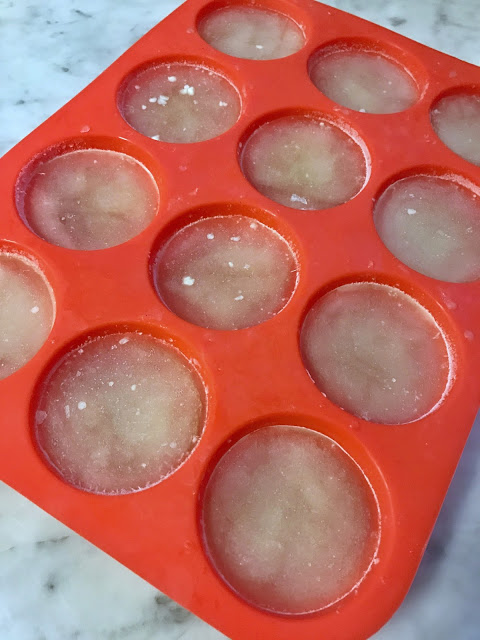 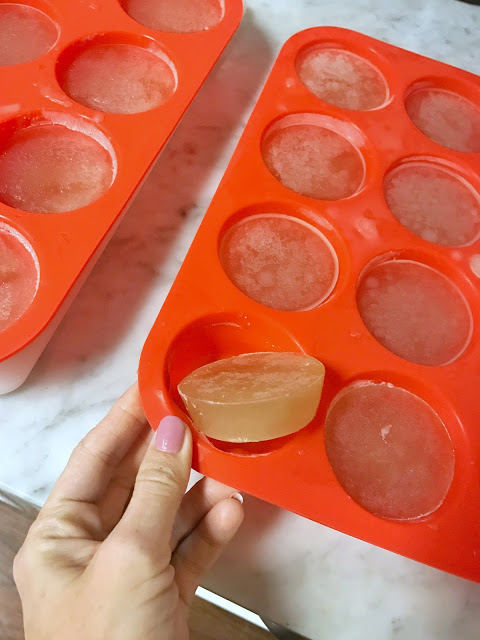 After the chicken stock has frozen completely, the portions can be easily popped out of the silicon baking cups by pressing from the bottom to invert each cup and pop the frozen stock portion out. 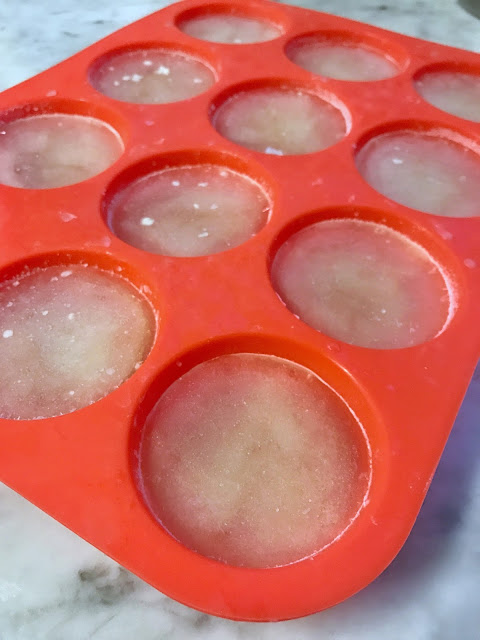 Note: To avoid the stock portions melting, you should try and remove them from the baking pan as quickly as possible.  When freezing more than one tray at a time, leave the extra trays in the freezer while working with the first tray. 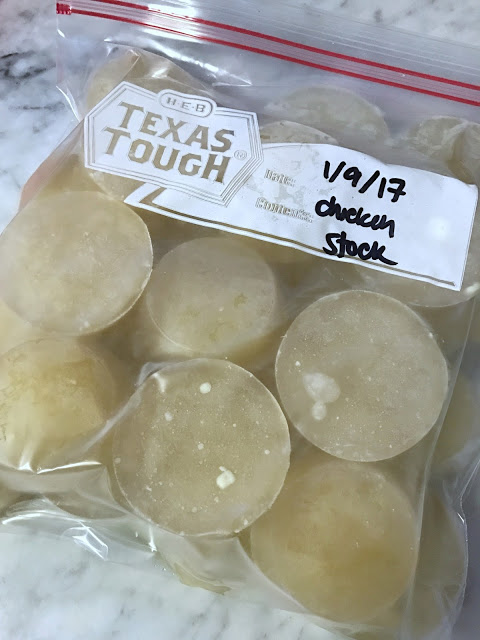 Place the frozen portions in a large freezer bag labeled with the date the stock was made (as Martha recommends that frozen stock be stored in the freezer for up to three months). 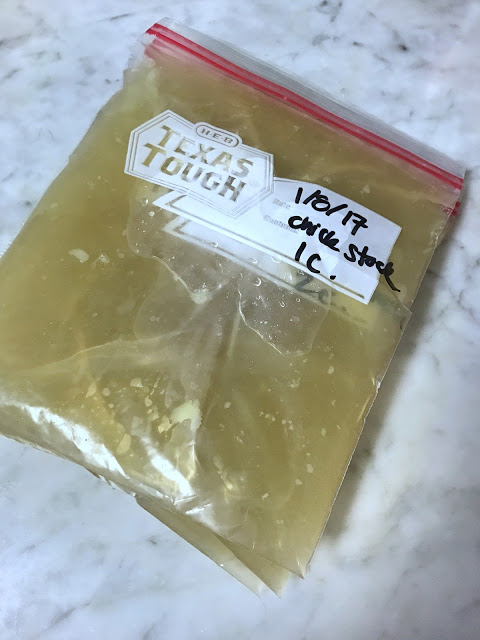 If you make a lot of soups or other recipes that require larger quantities of stock, you can also freeze stock in one or two cup portions in quart-sized freezer bags.  Remove as much of the air as possible before sealing the bag (unlike the example above, for which I hadn’t done this yet).  To freeze, lay the bags flat and stack them in the freezer.
For more cooking and storage tips for homemade stock, read Martha’s method here.
I am looking forward to making my first batch of homemade vegetable stock this weekend, and will be freezing that one next!  I was inspired by this cool video on BuzzFeed/Tasty on making homemade veggie stock from kitchen scraps.  Can’t wait to try it!
Tweet
Pin
Share
0 Shares