The hubs and I needed a weekend getaway, and we realized that we needed to go back to New Orleans, Louisiana. Best. Weekend. Ever. Out of all the good eating we have done around the world on our travels, this particular weekend in New Orleans was possibly the best eating weekend, collectively, that I have had in my life!

We definitely visited some of our old favorites (Café du Monde, The Gumbo Shop, and on the drives in and out of LA, Poche’s in Breaux Bridge and Olde Tyme Grocery in Lafayette – see those reviews and details in this post: Austin to New Orleans road trip – where to stop, stay, and eat for a drive to New Orleans). In addition to those, we found a couple of new favorites that were each as good, or better than the one before it.

Here goes on the reviews! 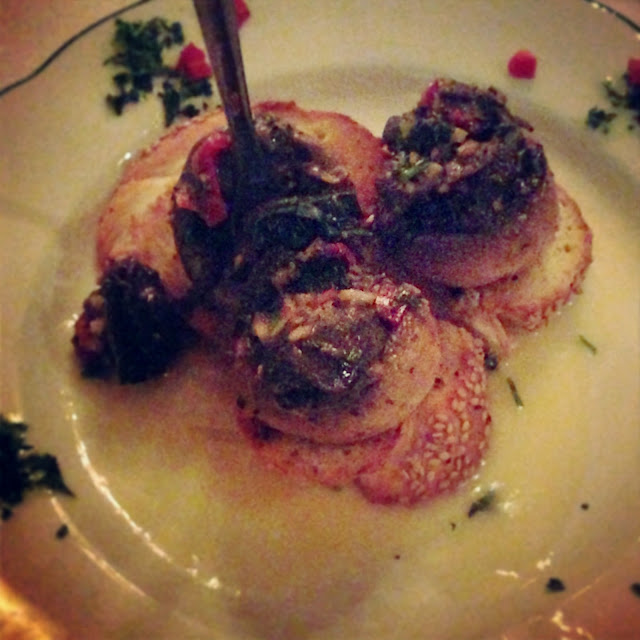 We came here after it was recommended by a friend, and boy was it worth the visit!  Everything we tried was delicious, but the escargot was a highlight for me – possibly the best escargot I’ve ever had.  Irene’s also has a nice, romantic atmosphere.  We didn’t have a reservation, but did manage to get a seat, though we did have to wait for a while (which we expected on a Friday night with no reservation).  Luckily you can wait in the lounge, where there was a pianist, some nice romantic lighting, and drinks. 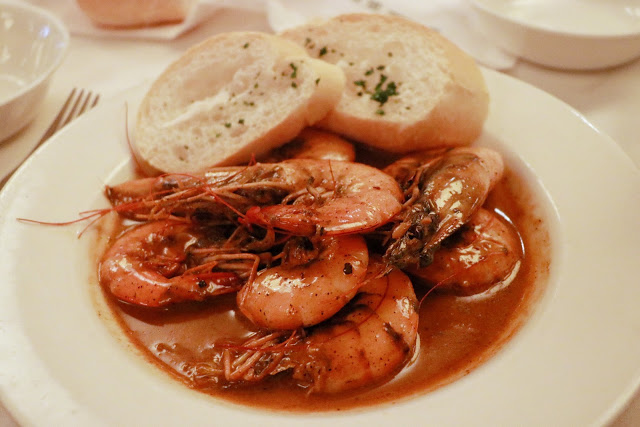 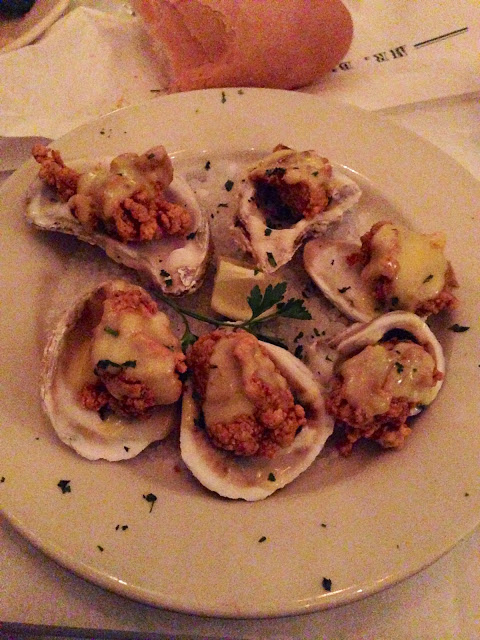 After reading the reviews on TripAdvisor, we had to give Mr. B’s a try.  One word can describe the food: unbelievable!  Now, my husband and I travel a lot, and out of all the amazing meals we have had in the world, my husband claims the BBQ Shrimp at Mr. B’s as honestly one of the best things he’s eaten in his life.  It is pretty close to the top of my list too.  We each tried an appetizer of our own.  I totally scored with my choice of the fried oysters on the half shell.  The meal would have been worth it for that alone, but because of the reviews raving about the BBQ Shrimp, we had to give that a try.  We decided to split the entrée, and it was still a great amount of food (especially after the appetizers).  Like others said on TripAdvisor, the sauce is so good, that you don’t care if you are getting messy, even in such a nice restaurant (the shrimp come still in their shells, and sopped in sauce).  I was tempted to lick my plate, the sauce was so good.  We didn’t make a reservation in advance, so did have to wait a while on a Saturday night (which was expected), but it was so worth the wait.  If you are thinking of going here, don’t hesitate, and for the love of god, order the BBQ Shrimp. You will not regret it.

Kingfish
337 Chartres St, New Orleans, LA 70130
After reading about mixologist Chris McMillian of Kingfish in Spirit Magazine, my husband and I had to visit.  Chris was special! My husband, a bourbon lover who is not usually a fan of Mint Juleps felt compelled to try one.  It redefined the drink for him.  The combination of ingredients was perfectly mastered… not the type you’d get for mainstream pleasure, but a drink that complements, doesn’t detract from, the quality of the bourbon.  There was true inspiration that went into each drink Chris poured, and he was also a delight to chat with. 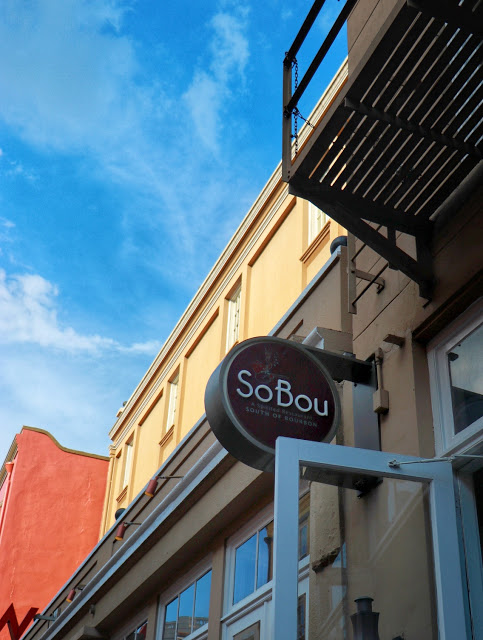 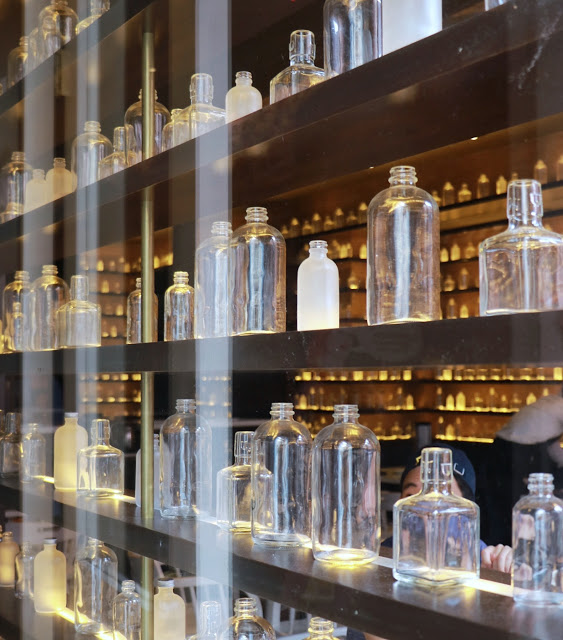 My husband and I ventured to SoBou after the same article in Spirit Magazine (referenced above) on the best of New Orleans.  He had heard that SoBou boasted one of the best mixologists in the city.  Our cocktails were pretty special, and my husband was delighted to try a special drink made just for him by our bartender (after telling them about the best Mint Julep he’d ever had at Kingfish the night before, our bartender felt challenged to show him how good a Mint Julep he could make — and it was good!).  I also tried an intriguing appetizer called Sweet Potato Beignets (foie gras fondue, duck debris, and chicory coffee ganache), which was so good.  Overall a very cool bar with great food and stellar bartenders.  We would visit again! 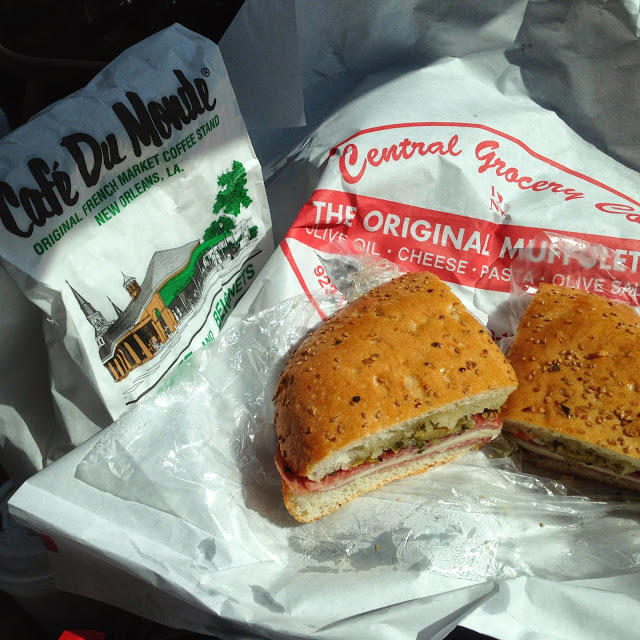 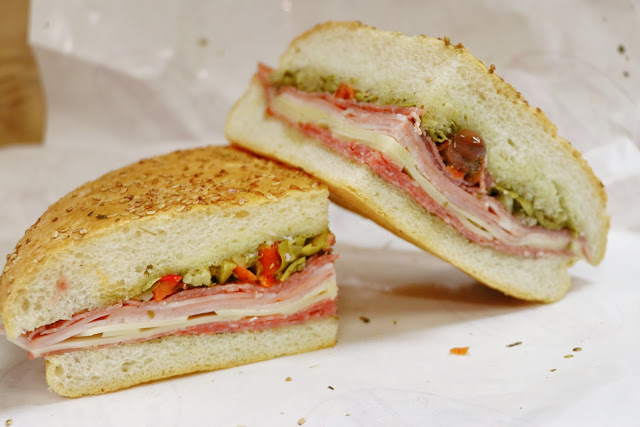 On this trip we finally got around to trying Central Grocery for their muffuletta sandwich (they claim to be the creator of the original muffuletta), and now know that this will become a NOLA tradition for us.  The sandwich was just perfect.  My husband and I split half the sandwich, which was plenty (the whole sandwich would have been four pieces of a round sandwich, but you can order in halves, so we just had a fourth each).  In addition to being a delicious sandwich, it also had the right amount of bread, protein and oil (olive oil) to help settle the tummy after a late night in the French Quarter. 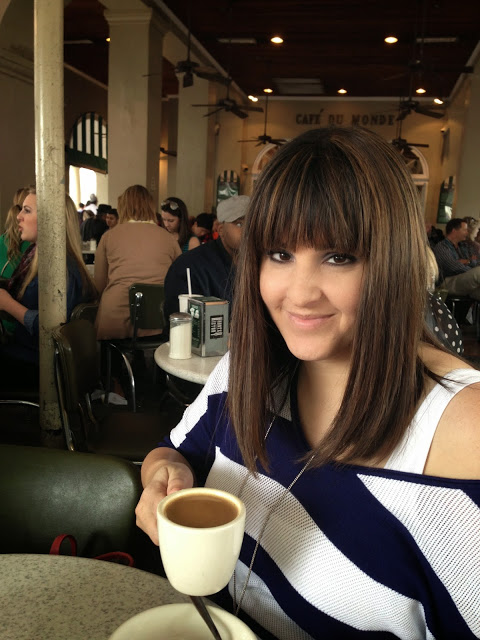 Ahh, and I can’t forget the delicious café au lait with chicory…

Ah, NOLA.  You make me fall more in love with you each time we are there.  Looking forward to the next visit already!