If you’re unfamiliar with the term, ‘compote’ is a sauce of fruit stewed in syrup. Compote can be served on top of desserts like ice cream or cheesecake, on oatmeal, mixed into yogurt, on top of pancakes, and more. Today I’m sharing an easy and delicious peach compote recipe. These sweet and tangy stewed peaches are prepared in your Instant Pot or pressure cooker, making this fruit sauce hands-off and easy to cook. If you’re looking for Instant Pot peach recipes, you’ll want to pin this Instant Pot compote!

For more easy Instant Pot recipes like this, you’ll love my cookbook, Pressure Cooker Cookbook for Beginners! Get your copy now (available in both paperback and digital formats), and check out some sneak peek recipes from the cookbook and my other Instant Pot recipes here.

I developed this recipe as part of the Allrecipes Allstars Tastemakers program. Rate, review, and photograph my recipe for Instant Pot® Peach Sauce on Allrecipes here, see the full Instant Pot Peach Compote recipe along with some of my cooking tips below, or Jump to Recipe directly.

How to make peach compote in the Instant Pot

To make this Instant Pot compote, start by placing 3 cups of chopped ripe peaches (about 3-4 peaches, pitted) in the inner pot of a multi-functional pressure cooker (such as an Instant Pot). Sprinkle some brown sugar evenly over the top of the peaches, and let it sit for 10 minutes. After 10 minutes, stir in fresh lemon juice, water, and ground cinnamon.

Unlock and remove the lid, then select the Saute function on your pot. Cook, stirring and smashing the peach chunks with a spoon until you have a thick, chunky consistency (this will take about 2 minutes). Press Cancel to end the Saute function.

Allow the Instant Pot compote to cool a bit, then you can either serve it immediately, or store the peach compote in jars in the refrigerator to serve later.

How to serve peach compote

Peach compote is great as a topping for breakfasts (like oatmeal, pancakes, or yogurt), or as a topping on desserts (like ice cream or cheesecake). Since this is an Instant Pot compote, it’s a very easy and hands-off peach compote recipe.

Print Recipe
Instant Pot Peach Compote
These sweet and tangy stewed peaches can be served on top of desserts like ice cream or cheesecake, on oatmeal, mixed into yogurt, on top of pancakes, and more. Preparing peach compote in your Instant Pot or other multi-function pressure cooker makes this delicious fruit sauce hands-off and easy to make. 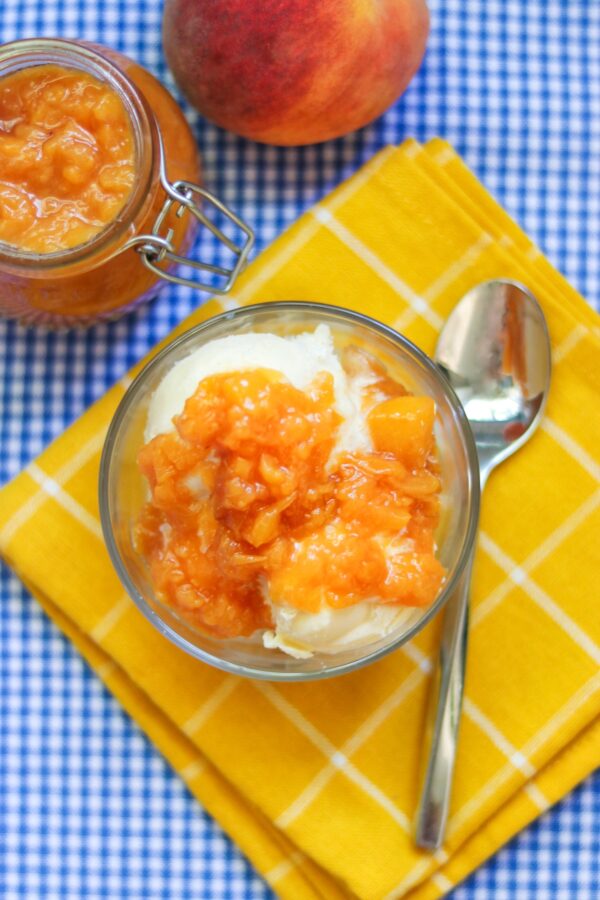