I’ve really enjoyed developing recipes for the Instant Pot lately! After finding several delicious, tried-and-true Instant Pot recipes and experimenting myself, I’ve been creating my own Instant Pot/pressure cooker recipes. You’ll be seeing more to come. The recipe I am sharing today is for an insanely easy (and delicious!) rice pudding. The addition of sweetened condensed milk and raisins add sweetness and texture.

New to the Instant Pot? Then my new cookbook is for you! Pressure Cooker Cookbook for Beginners is your guide to everything you need to know about this culinary gadget―and how to make it work for you, along with step-by-step instructions for 75 different delectable recipes to help tackle meals during a busy week. Order Pressure Cooker Cookbook for Beginners on Amazon here.

I developed this recipe as part of the Allrecipes Allstars Tastemakers program. Rate, review, and photograph my recipe for Instant Pot® Rice Pudding on Allrecipes here, and see the full recipe (Jump to Recipe) along with some of my cooking tips below.

It’s important to rinse the rice until the water runs clear, then strain out most of the water before starting. You add the rice to your multi-functional pressure cooker (e.g. an Instant Pot) along with milk, water, vanilla extract, cinnamon, and salt and stir well. You will cook it using the Instant Pot’s Porridge function.

This is how it looks after you unlock and remove the lid.

Stir the sweetened condensed milk into the rice pudding until combined.

The final step is to stir in the raisins. Serve immediately while warm, as the texture will be perfect!

Here’s the quick and easy Instant Pot Rice Pudding recipe! You’ll want to pin this one!

Print Recipe
Instant Pot® Rice Pudding
This rice pudding recipe couldn't be easier when made in your Instant Pot® or other multi-functional pressure cooker. Raisins add sweetness and texture. 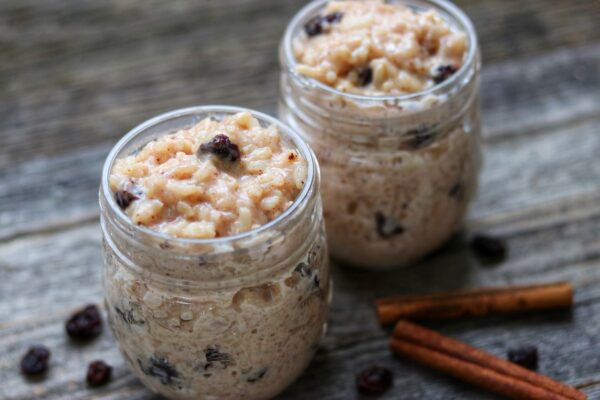 I developed this recipe as part of the Allrecipes Allstars Tastemakers program.  Rate, review, and photograph my recipe for Instant Pot® Rice Pudding on Allrecipes here.