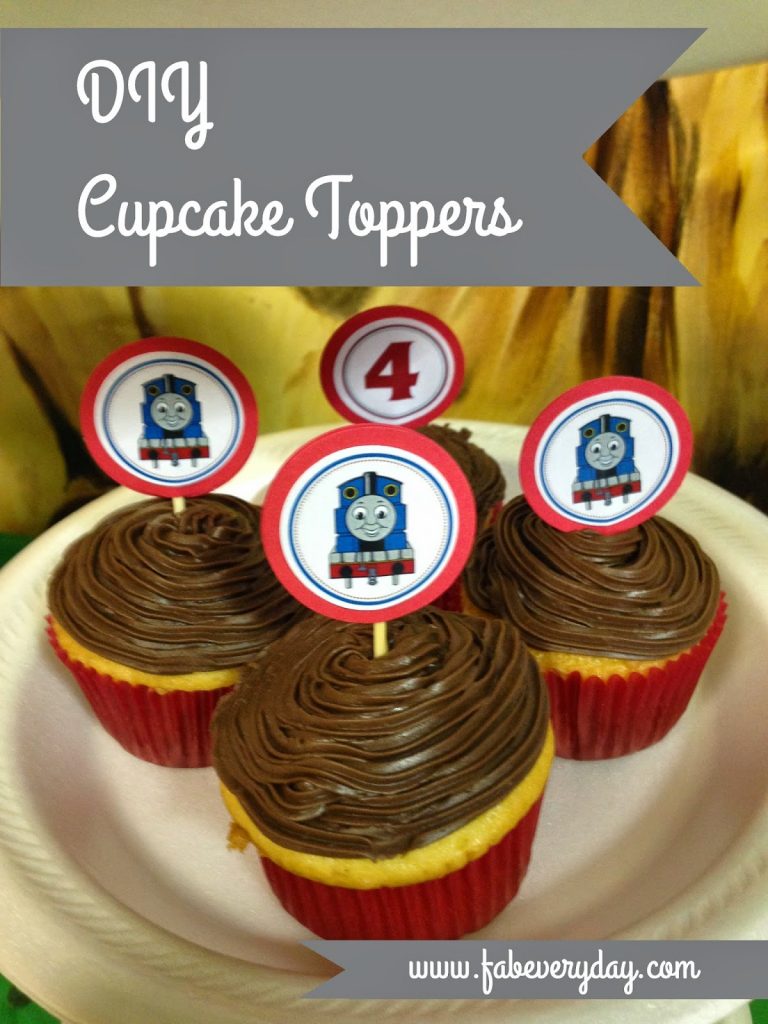 I have two big parties to plan in the remainder of the year: my son’s 5th birthday party (Lego-themed), and my father’s 70th birthday party – both in December.  Very fun, but very busy, especially during the holiday time.  Hence, I have been planning both for a bit so that I don’t have it all as a mad rush at the end of the year.
One way I have found to save money on party décor without much effort is to make my cupcake toppers.  Pretty fondant toppers can cost a lot, but I love being able to incorporate the party theme without spending that kind of cash. When planning parties, I try to find a balance of what I can DIY to save money with what is actually worth the effort to DIY (time and stress-wise). These simple cupcake toppers have become a go-to for me because they are quick and easy, cheap, and can be interchanged with almost any party theme and color-scheme.
Here is how I do it!

What you need:
A print-up of the image(s) you’d like as your topper (sized small enough to fit into your small circle punch)
Scrapbook and construction paper
Circle punches (two sizes)
Double-sided tape
Glue gun
Toothpicks

Instructions:
Punch out the topper images with the smaller sized circle punch.  Here I am using Disney/Pixar Cars character clipart found online. You can also interchange images with numbers in a pretty font to denote the age of the birthday boy or girl (like I did with the Thomas-themed toppers and the number 4 in the picture above).

Using double-sided tape, adhere the image circles to a circle of construction paper.

With your glue gun, swirl a fair amount of glue on the back of the circle with the image taped to the front. Making sure I have the toothpick positioned straight down from the image, press the toothpick into the hot glue (I twist the toothpick so that the part I am adhering is covered in glue).

Quickly (while the glue is still hot and wet), attach another construction paper circle over the toothpick (one that does not include the image taped onto it), lining it up as even as you can with the front circle.

Press this back circle down into the glue and onto the toothpick.

Dressed up and ready for my weekly grocery run (do

The most refreshing sounding combo of four words: