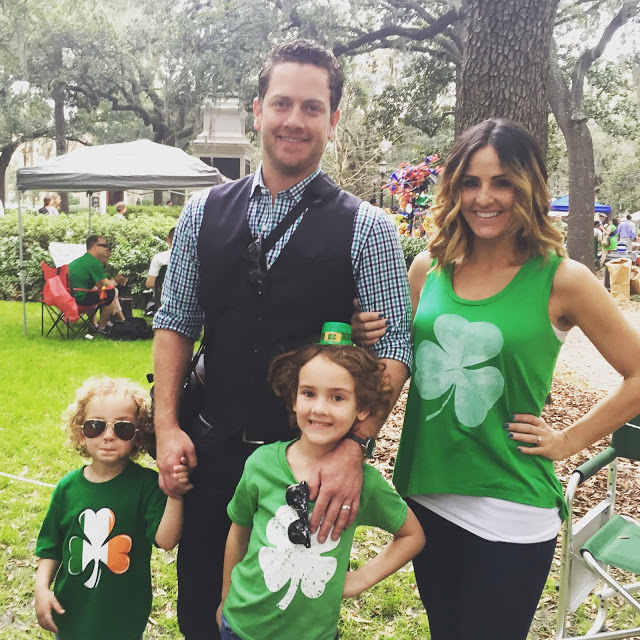 Happy St. Patrick’s Day from the Fab Fam!
We love Savannah.  It is such a cool city, and is also the home of one of our favorite families: Sarah, Lenny, and their adorable boys.  We decided to visit them during our Southern US road trip last spring break, which just so happened to be around St. Paddy’s Day.  St. Patrick’s Day is a big deal in Savannah – in fact, they have one of the biggest St. Patrick’s Day parades in the US!   Today I am sharing about our experience in Savannah for St. Patrick’s Day specifically, and why you need to add Savannah St. Patrick’s Day celebrations to your travel bucket list.  For more recommendations for visiting Savannah, check out these posts:

Our boys were especially excited about St. Paddy’s Day this year, because they were going to be in the famous Savannah St. Patrick’s Day Parade with our friends and their family!  Bonus – they were reunited with one of their little buddies from LA (before we moved to Texas and they moved to Georgia)! To learn more about the parade, including info and a route map, visit the official Savannah St. Patrick’s Day website here. 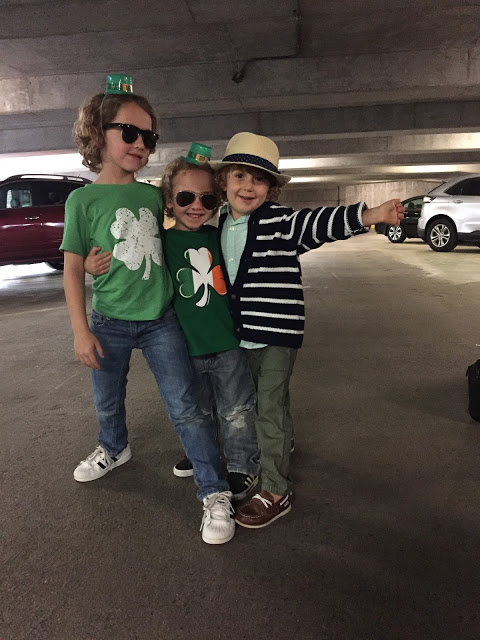 Get to the parade early, and grab breakfast at the DeSoto

On parade day, we started off with an early buffet breakfast at the Hilton (now called the DeSoto Hotel), for green grits and other festive food, so that we could get our spot before the roads were blocked off.  Then Sarah and I found a spot to watch the parade while the boys queued up. 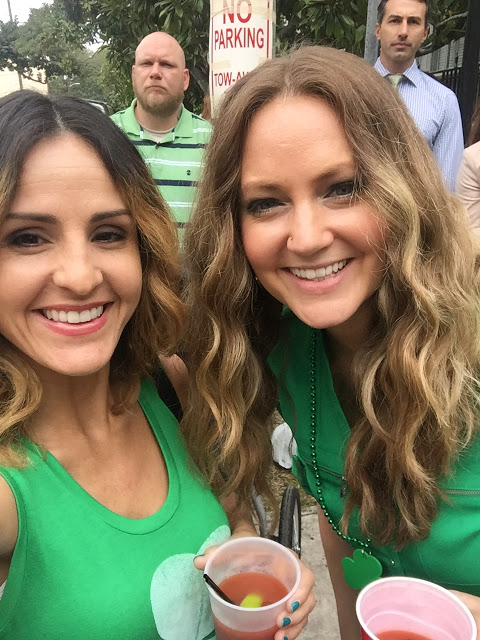 I miss this girl so much! 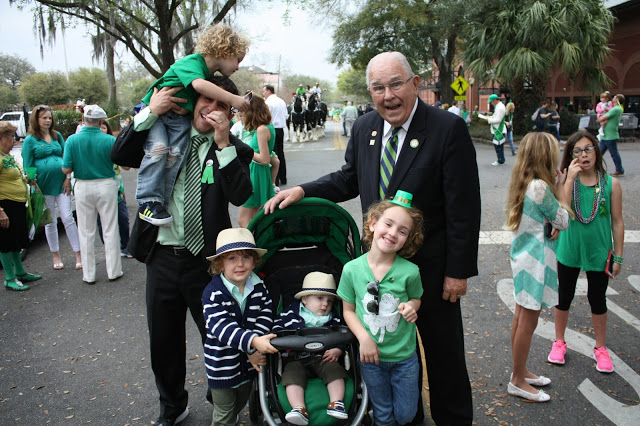 The four boys with Lenny and his father 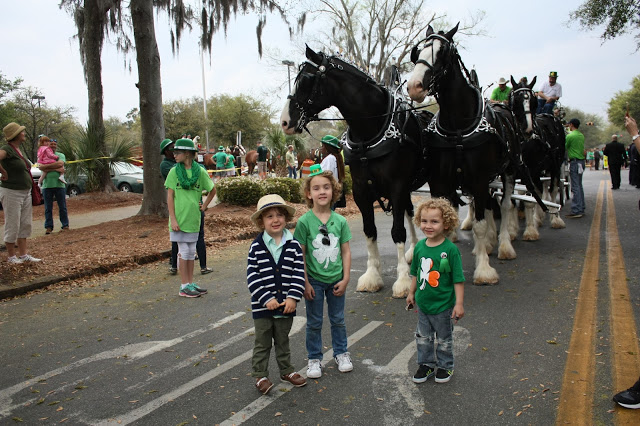 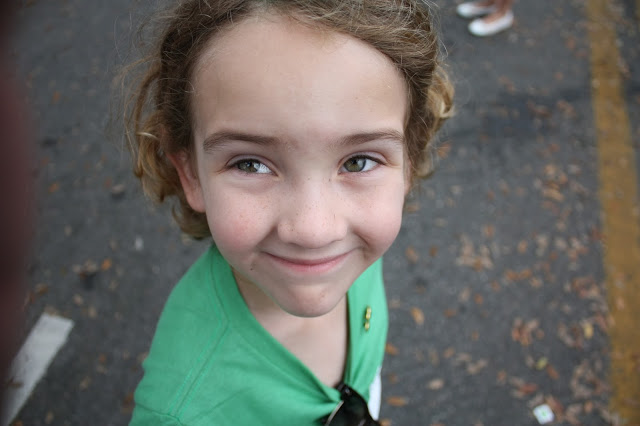 Find a spot to “tailgate” and watch the Savannah St. Patrick’s Day Parade

The parade goes on for hours, going through the streets and around Savannah’s beautiful, Spanish moss-draped squares.  Sarah and I were waiting to see our boys (including the adult ones), then we were going to our “tailgate” spot in one of the squares to relax. 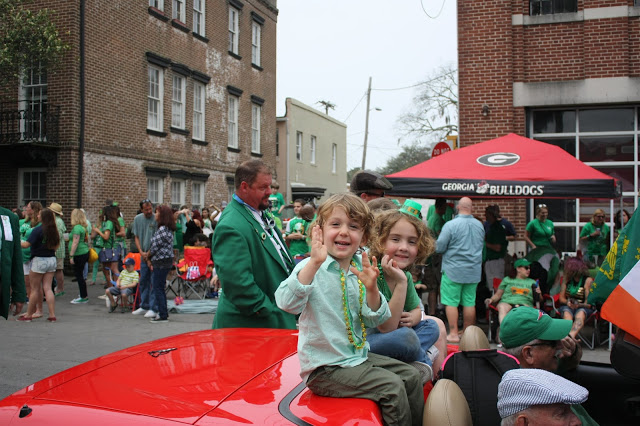 Too much fun!  Too much cuteness! 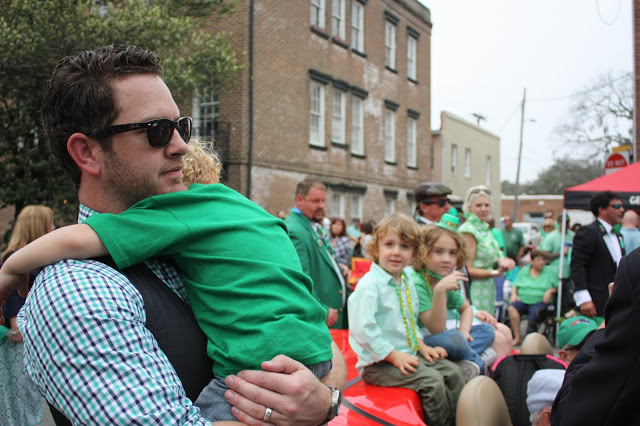 S got a little tired, and convinced Daddy to give him a ride… 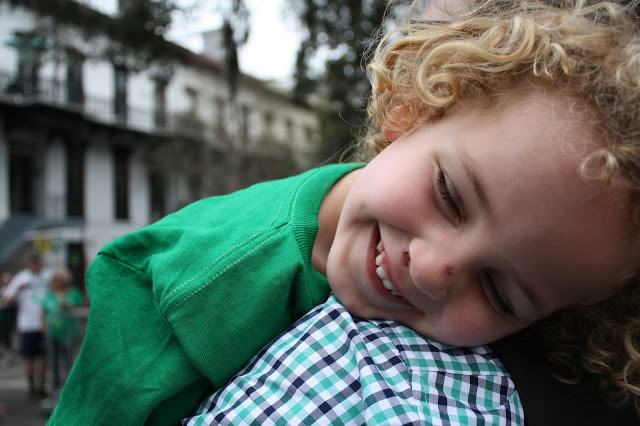 … little faker!  Also, I have no idea where his scratches were from, but he was a rough-and-tumble three-year-old and always had some scratch or bruise somewhere. 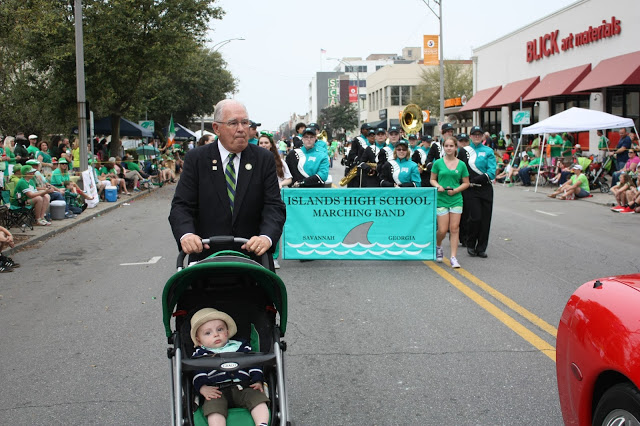 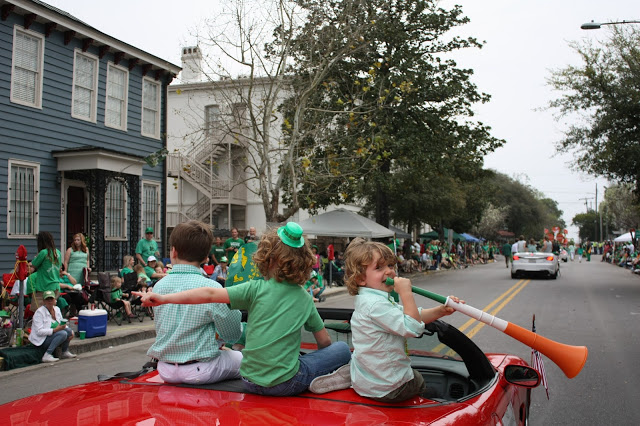 These kids are naturals 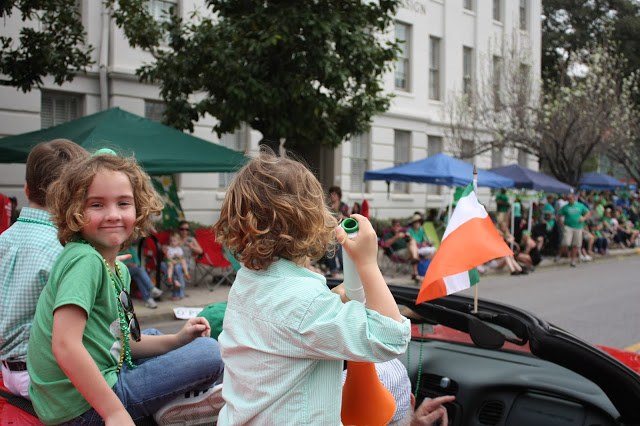 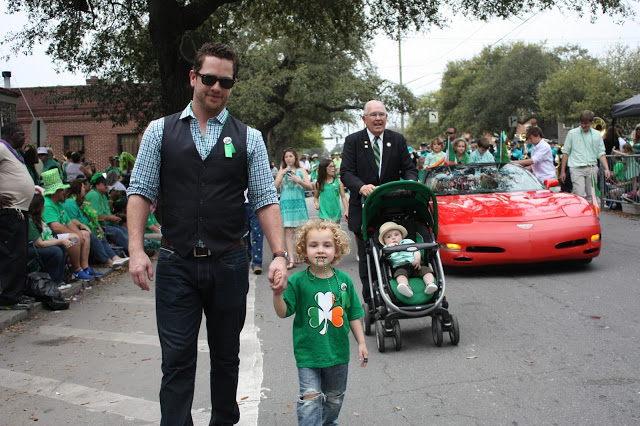 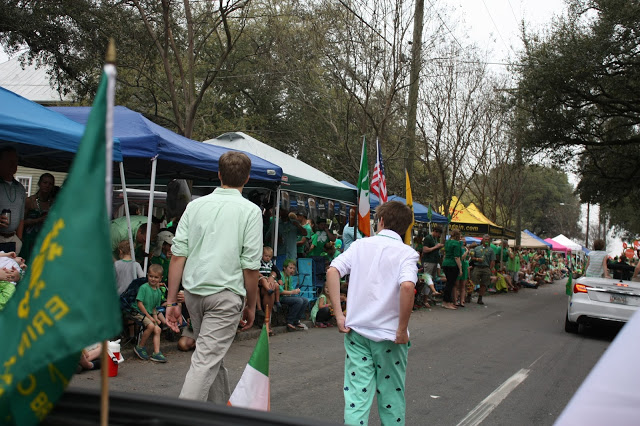 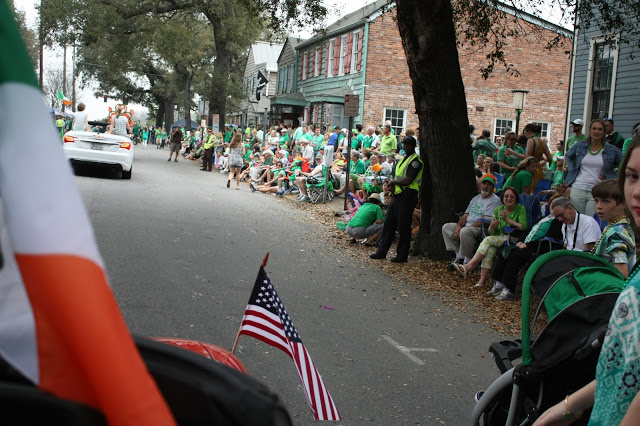 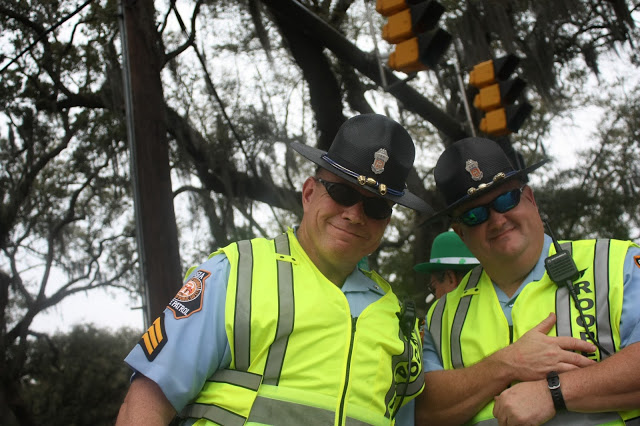 The crowds were huge along the parade route! 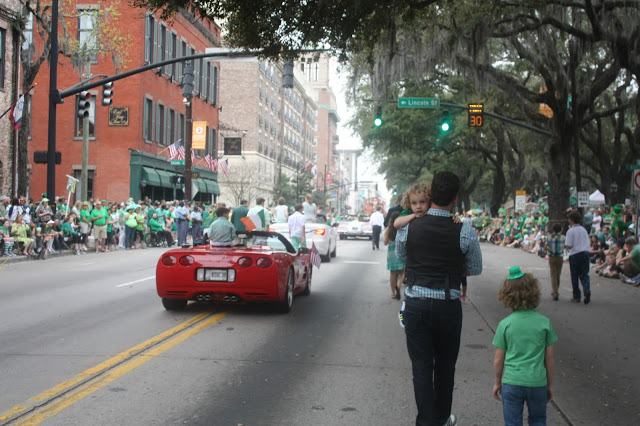 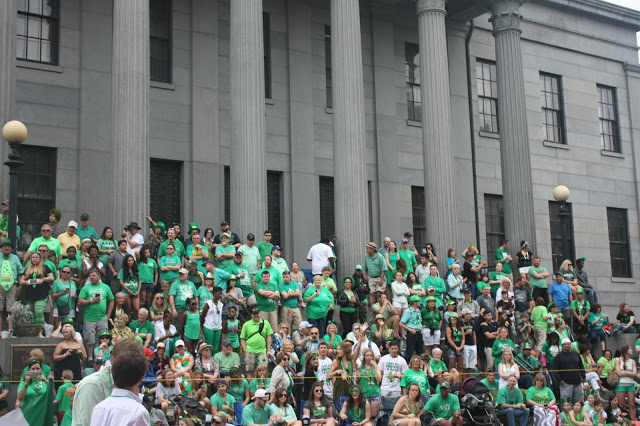 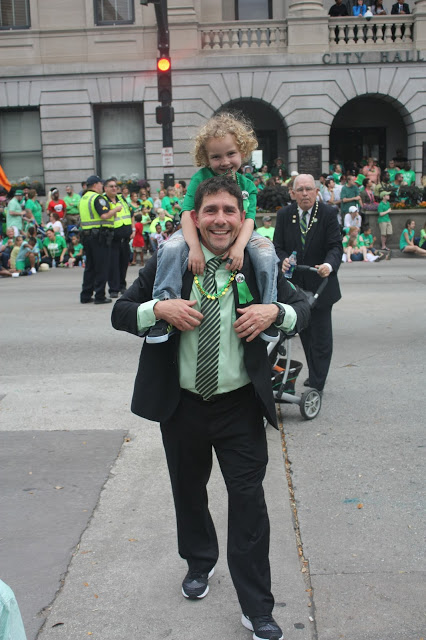 S convinced Lenny to give him a ride next! 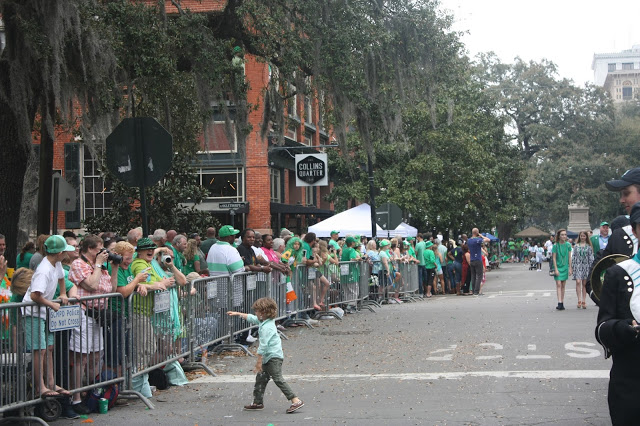 Playing to the crowd!
Once they were done, the boys found a spot near where Sarah and I were staked out to watch more of the parade themselves. 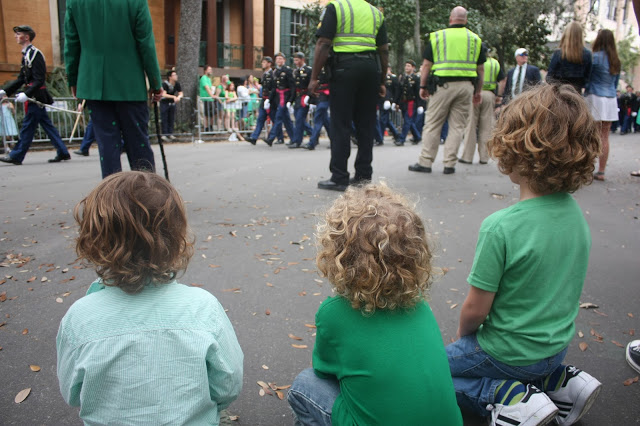 Too much blonde, curly cuteness!  Seriously, these boys look like they could be related!

One fun tradition of the parade in Savannah for St. Patrick’s Day is that women wear bright lipstick and leave kiss marks on the men of their choice who are walking in the parade. The soldiers and kids always end up with the most lipstick on them!  Our boys acted like kisses were “gross,” but secretly wanted all the kisses! 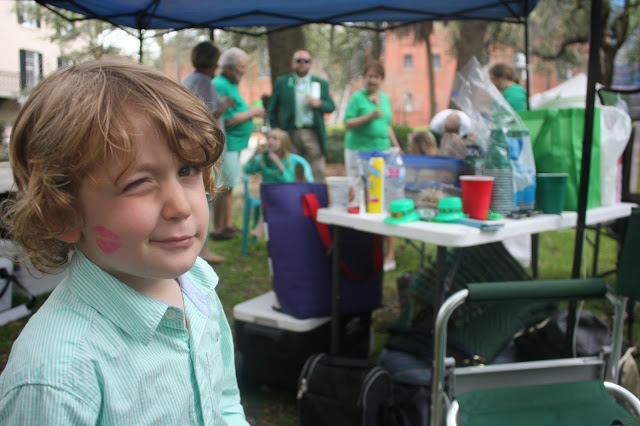 This kid is too much!  Now you see why he gets along so well with my boys.

At our “tailgate” spot in the square, the kids ran around and had a lot of good, clean fun for the rest of the parade. 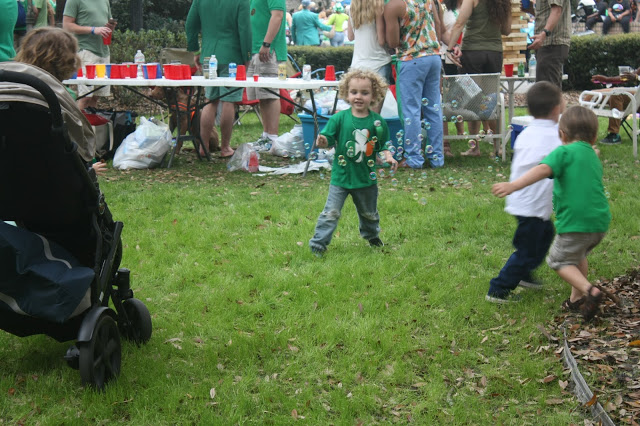 … and the adults had some (less clean) fun, too! 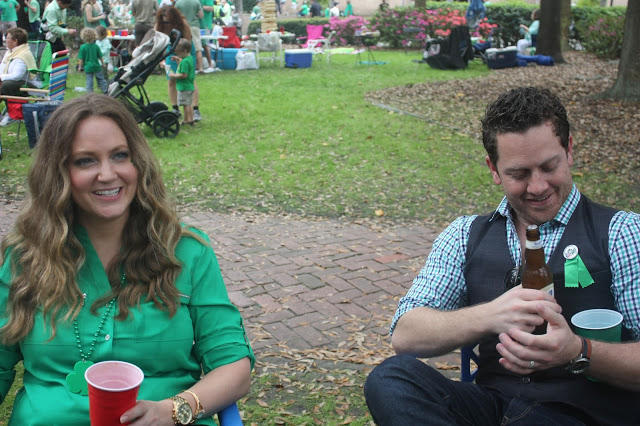 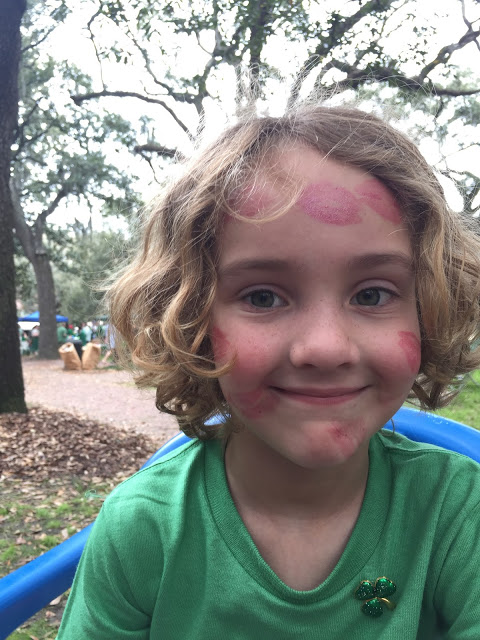 I made sure my G was sufficiently covered in lipstick kisses!

More than just the parade – more things to do in Savannah for St. Patrick’s Day

After things calm down from the parade, the party is just beginning in Savannah.  All of the bars and pubs throughout town and on the river are hopping for St. Patrick’s Day!
Savannah is such a fun destination any time, but especially for St. Patrick’s Day.  If you have a chance to visit during this time of year, do yourself a favor and go!  And don’t forget to check out my other tips and recommendations for Savannah in this post here, and the others linked above.
What’s your favorite destination for St. Paddy’s Day?  What other cities throw an epic celebration?