How to make Bendy and the Ink Machine Bacon Soup

If you’re ready to make the Bendy and the Ink Machine Bacon Soup recipe now, you can Jump to Recipe at the bottom of this post. Or, keep reading for some cooking tips and step-by-step instructions.

Here’s what you need to make Bendy Bacon Soup:

I knew from my Easy Slow Cooker Cheesy Potato Soup recipe that frozen hash brown potatoes work great in slow cooker soup recipes, and save a ton of time (you don’t have to peel and chop them and they can cook from frozen). For the beans, I used Great Northern, but other white beans like Navy or Cannellini would work as well.

You start this recipe by cooking the bacon. Since bacon is a key ingredient in this soup (it is called Bacon Soup, after all, I used a whole 12 oz. pack. Cut the bacon into 1″ pieces, then cook in a skillet until just crisp. Cool on a paper towel-lined plate to soak up some of the excess bacon grease.

Pour in a 28 oz. carton (4 cups) of beef broth, then stir into the vegetable and bacon mixture along with salt, pepper, and garlic powder.

Cover and cook on low for 4-5 hours, until the celery and carrots are tender.

Here is what it looks like after it is ready. Since we had some leftovers, we noticed that the broth actually thickened as it cooled in the fridge, and made delicious leftovers for lunch the next day.

Here’s my version of Bendy and the Ink Machine’s Bacon Soup! This hearty soup is not only a great snack for a BATIM-themed party, it’s also a warm and filling soup recipe for cold fall and winter months.

Here’s the recipe! Don’t forget to pin this one for planning your own Bendy and the Ink Machine birthday party. 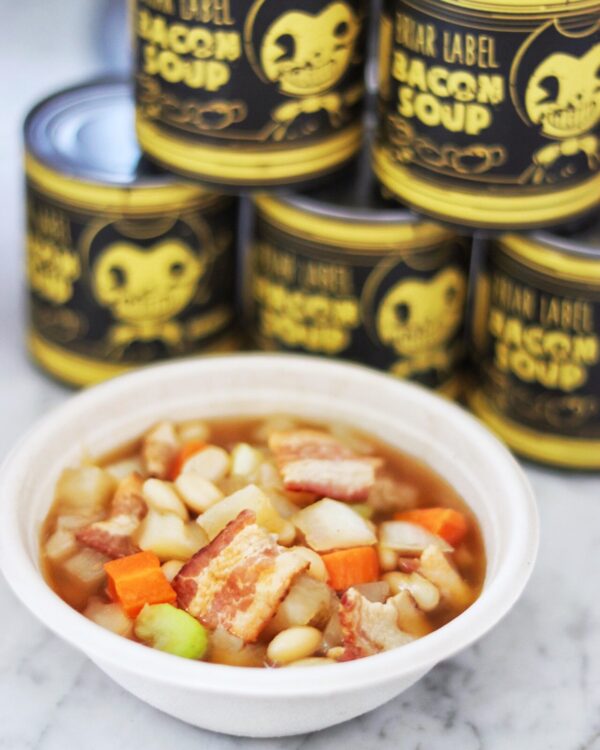