I am SO excited to share this new easy recipe with you guys. I love potato cheese soup. I worked at Marie Callender’s in high school and college and could have eaten their potato cheese soup every day. Fun fact – my hubby and I met at the Callender’s flagship restaurant in LA (sadly, it closed down recently), and we shot our Old Hollywood-themed engagement photos there since it was a gorgeous art deco building. Anyway, I feel like I have finally created a recipe that rivals Marie Callender’s potato cheese soup recipe. The best part? It is soooo easy to make, and practically set-it-and-forget-it in the slow cooker. This rich, thick, and creamy soup is also a great way to use up leftover holiday ham! I incorporated a shortcut (you know I love my recipes to be easy) by using frozen hash brown potatoes which really does make this a dump-and-go recipe for the slow cooker. So now you have no excuse not to make this delicious soup since it requires very little effort on your part. Pin this one stat, and make it at your next opportunity. Trust me – your family will be begging for this one again!

I developed this recipe as part of the Allrecipes Allstars Tastemakers program. Rate, review, and photograph my recipe for Easy Slow Cooker Cheesy Potato Soup with Ham on Allrecipes here, and see the full recipe along with some of my cooking tips below. Or go ahead and Jump to Recipe to get straight to it.

Can you make this Slow Cooker Cheesy Potato Soup in the Instant Pot?

Yes! This recipe is easily adapted to make in the Instant Pot instead of the slow cooker. See my recipe for Instant Pot Cheesy Potato Soup here.

How to make this Easy Slow Cooker Cheesy Potato Soup

Dump your frozen hash browns, diced ham, onion, celery, chicken broth (I like to use homemade stock if I have it, but canned or carton chicken stock will do just fine), salt, pepper, and garlic powder in a slow cooker.

Stir well to combine, then place the lid on the slow cooker. Yep, it’s that easy to prep.

Cook on Low heat in the slow cooker until celery is soft, about 4 to 5 hours.

Here’s where the magic happens. After the 4-5 hours on Low, open the slow cooker and mix in the cream cheese, stirring until melted. This will go faster if the cream cheese is softened first, but it’s not a requirement.

Oh, but we’re not done. Next you mix in some shredded cheddar cheese (I use pre-shredded cheese from a pack to save time and effort).

Stir until the cheese is melted.

To finish it off, return the lid to the slow cooker and cook on Low for an additional 30 minutes, stirring occasionally.

Serve topped with chopped green onions as a garnish.

Try this one ASAP and comment to let me know what you think! If you love it, please share and pin!

Print Recipe
Easy Slow Cooker Cheesy Potato Soup with Ham
This rich, thick, and creamy soup is a great way to use up leftover holiday ham! Made in your slow cooker, and using shortcuts like frozen hash brown potatoes, this delicious soup requires very little effort on your part. 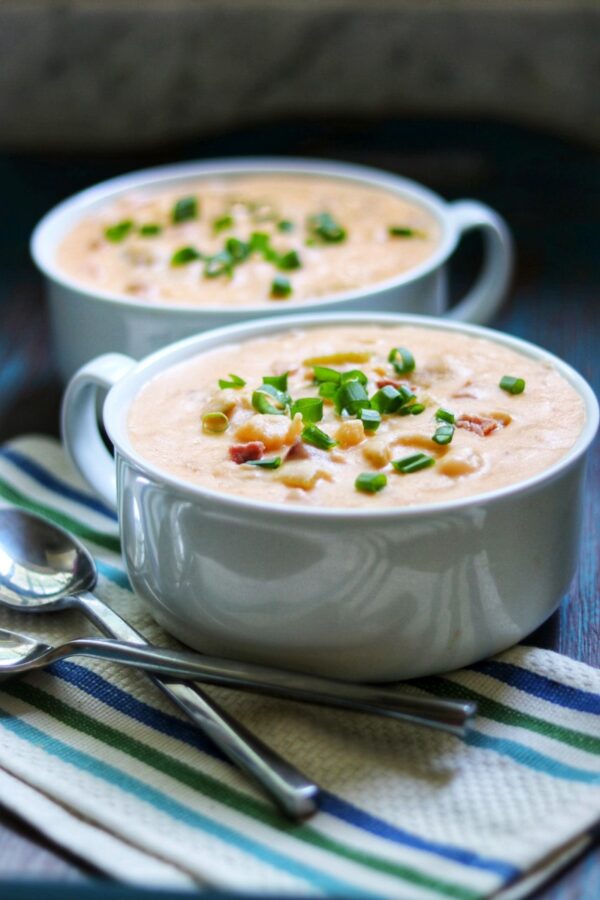 This recipe is easily adapted to make in the Instant Pot instead of the slow cooker. See my recipe for Instant Pot Cheesy Potato Soup here.