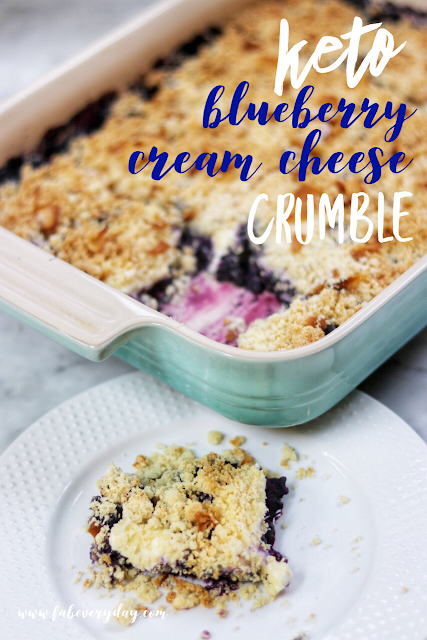 My sister and brother-in-law live a keto lifestyle. It’s always great eating at their house, as their meals always consist of delicious meats and sauces (and none of the guilt). What is sometimes tough, however, are the dessert cravings, as many traditional desserts are off-limits for keto. Problem solved with my sister’s awesome keto blueberry crumble recipe! As they have been ketogenic for over two years, they are able to have fruits (healthy carbs) in moderation, so this dessert is a major treat! If you’re looking for a satisfying low-carb or keto dessert recipe, too, you’ll definitely want to pin this keto blueberry cream cheese crumble! Bonus – it’s also gluten-free! Check out more of my keto recipes here.
Get the full Keto Blueberry Cream Cheese Crumble recipe at the end of this post, or keep reading to see some step-by-step cooking tips for making this satisfying keto dessert. 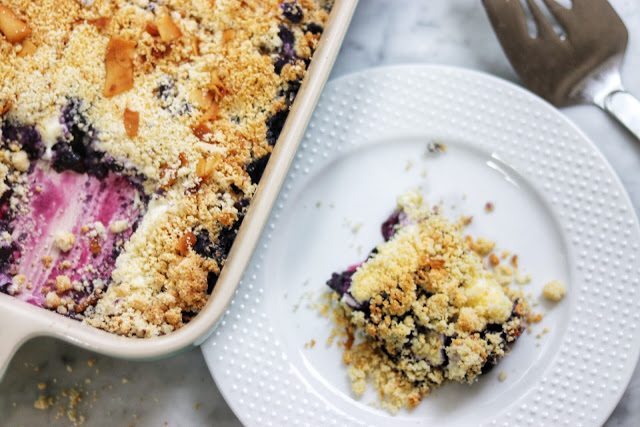 In addition to being delicious and low in carbs, one of the best parts about this keto blueberry crumble recipe is that is pretty easy to make! 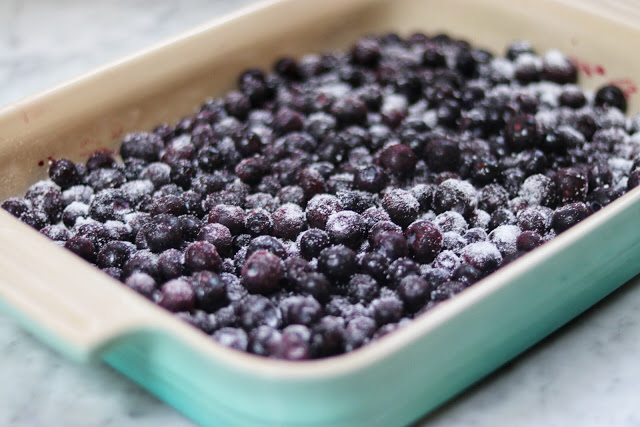 I start by placing some partially-defrosted frozen blueberries in the bottom of a baking dish, then layering a dusting of Splenda over the top. Splenda is my preferred sweetener for low-carb and keto-friendly dessert recipes, but you can also sweeten it with liquid stevia instead. 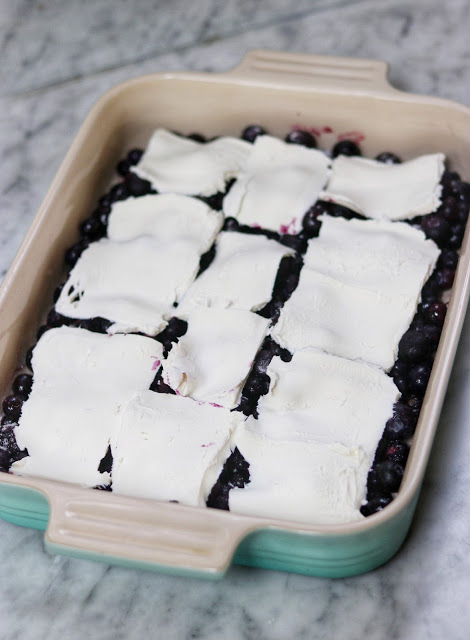 A brick of cream cheese is cut into thin slices, then layered evenly over the blueberries. 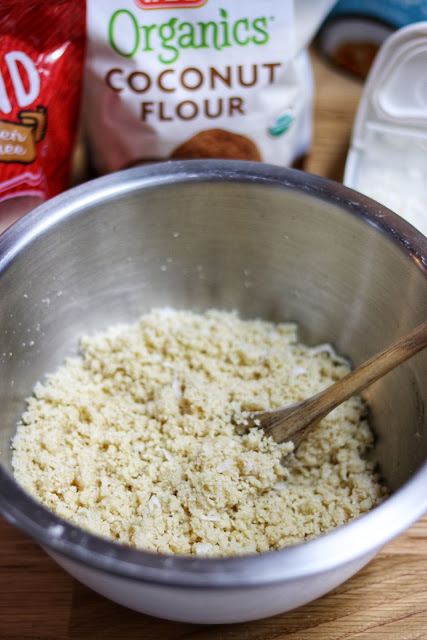 To make the crumble, I mix melted butter, salt, almond flour, coconut flour, and shredded coconut together in a bowl until the dry ingredients are completely moistened (but with mixture still a little chunky). 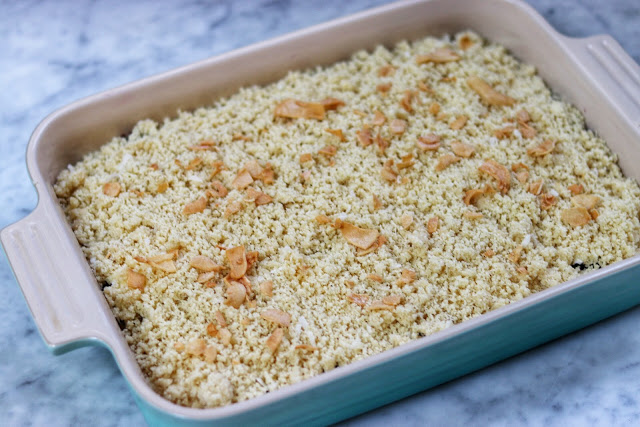 I spoon the crumble over the top of the cream cheese layer. As an optional add-on, I like to sprinkle coconut chips on top for added texture. 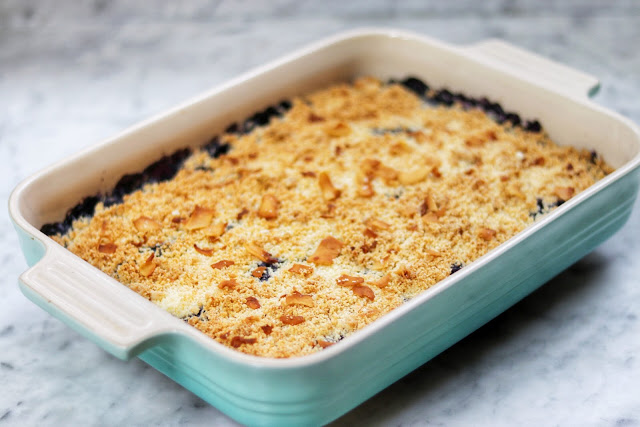 I bake the keto blueberry crumble covered for 15 minutes, then remove the cover and bake for an additional 15-20 minutes, or until blueberries are bubbling and the top is golden brown. 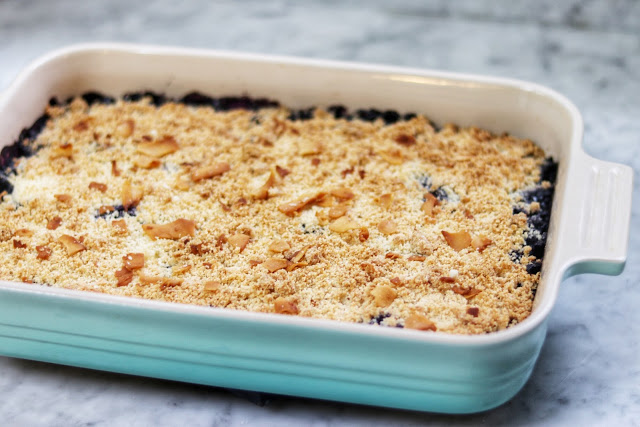 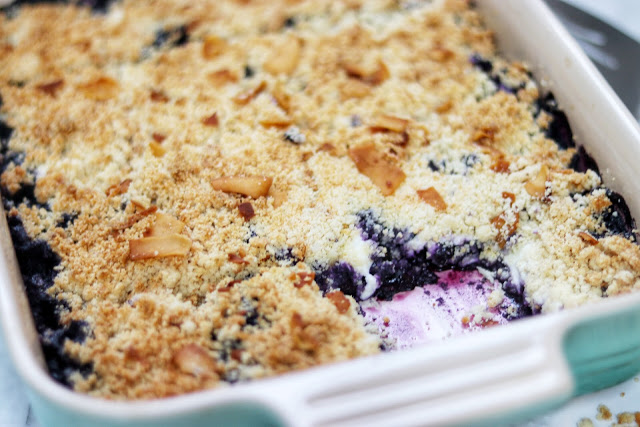 It’s got that satisfying, sweet-but-lightly-savory taste due to the combo of blueberries and cream cheese! 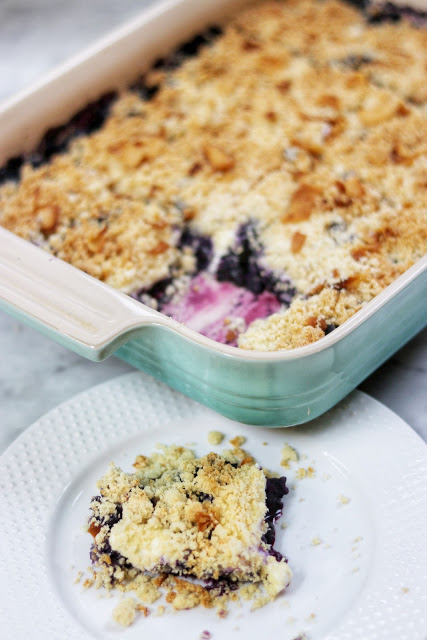 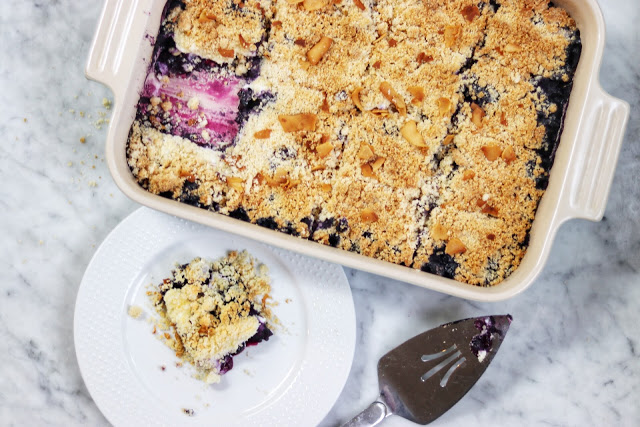 This Keto Blueberry Cream Cheese Crumble is so good that you’ll love it whether you are on a ketogenic diet or not!

OK, enough teasing.  Here’s the full recipe for Keto Blueberry Cream Cheese Crumble! Be sure to pin this one to your keto dessert recipe ideas boards.